55. The Attempt to Make Jesus King

14When the people saw the sign which he had done,a they said, “This is indeed the prophet who is to come into the world!”b
15Perceiving then that they were about to come and take him by force to make him king, Jesus withdrew again to the mountain by himself.
16When evening came, his apostles went down to the sea, 17got into a boat, and started across the sea to Capernaum. It was now dark, and Jesus had not yet come to them. 18The sea rose because a strong wind was blowing. 48And they made headway painfully, for the wind was against them. 53And when they had crossed over, they came to land at Gennesaret, and moored to the shore.
(Jn. 6:14–18; Mk. 6:48, 53)

b   “the prophet who is to come into the world”—The ancient prophets predicted a Messiah who would usher in an era of wondrous plenty, e.g., “And I will set over them one shepherd, my servant David, and he shall feed them. And I will send down the showers in their season; they shall be showers of blessing.” (Ez. 34:23, 26) Jesus had fed the five thousand, and they believed this fulfilled the prophecy and meant Jesus should be their king. (See also Ch. 13, fn. c.) 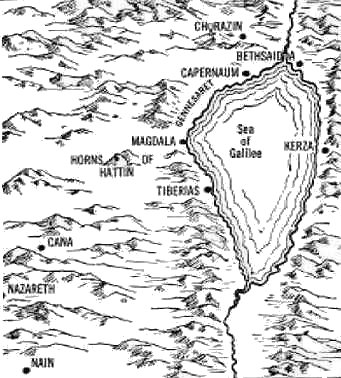 “they came to land at Gennesaret”

69
Next Back
Print All Pages